- We come LIVE from historic Madison Square Garden for the first post-SummerSlam Raw!

- Backstage, Christian, who just lost his match with Booker T, complains to Lance Storm, but Test comes up and tells them to cool down. He starts unfurling a large flag and says that tonight, he will make sure the UnAmericans are remembered forever.

- Later, in the back, Test shows off his new flag, which is displayed in its normal upright position. Test says that tonight, Old Glory is going up in flames, and busts out a blowtorch. Fade Out.

KANE's Return!!!
- The UnAmericans come to the ring, Test with the blowtorch and Storm with the flag. Test says that it's time to show what the rest of the world really thinks about America. Storm and Christian unfurl the flag . . .

- An EXPLOSION rocks the arena, the crowd goes wild and KANE's new video plays. After calming down, they go back to the flag, but Booker T and Goldust run in through the stands and attack. They take out Storm and Christian, leaving Test in the ring with the flag, frantically trying to light it!

- BOOM! The Fires of Hades explode again, and THIS time!!! KANE appears! 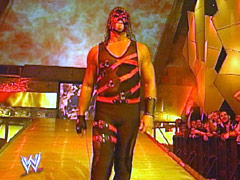 The Big FREAKIN' Machine is back! He walks purposefully down the ramp as the arena is BLOWIN UP with the cheers of "20 thousand Kanenites" as they let this favored son FEEL their excitement on his return! He comes to the ring and beats Test down.

- Christian comes from behind and hits KANE with a chairshot to the back that doesn't phase him. KANE, slowly turns - shaking his head as if to say "You haven't learned YET?!?" then takes into Christian! Christian is the lucky man to get the FIRST Chokeslam from KANE on his return to ring action!!!! KANE then clears the ring of Storm and Christian - Test tries the old BOOT to the Face - but KANE sees it coming and blocks it, knocking Test back, then chokeslams a flailing Test soundly into the mat! KANE straightens to the sound of the crowd RAISING THE ROOF! as Christian and Storm meekly pull Test from the ring.

The UnAmericans back up the ramp, as Booker celebrates and Goldust waves the flag. Booker hits the Spinaroonie as Goldust and KANE look on. Booker starts to leave, but KANE stops him. He tells Booker that the people didn't come just to see the Spinaroonie. They came to see 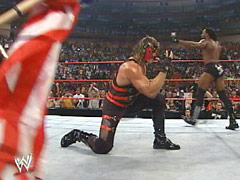 the KANE-aroonie! KANE stares at his glove and spins around, then lights the ringposts. Fade Out as the crowd, and wrestlers backstage, go ballistic!!!!!